President Joe Biden, ahead of the 2022 midterm elections, is attempting to temporarily lift the ban on summer sale of E15 gasoline. To help Americans burdened with ridiculously high gas prices. E15, which is known as Unleaded 88™, for its octane rating. It can be used in all cars, trucks, and SUVs produced after 2001 But what does it mean for the consumer, and how will it affect them?

E15 is 15% ethanol added to fuel, a biofuel that is mainly made from corn in the US. E15 gas is only compatible with passenger cars produced since 2001. The US Environmental Protection Agency (EPA) has not approved E15 in motorcycles, older cars, or other gas engines such as lawnmowers or boats.

The EPA mandated ethanol to lower carbon emissions. When left untreated, blended ethanol fuels can start “phasing.” Ethanol absorbs water; when the ethanol in the fuel absorbs too much water, it separates and drops the water to the bottom of the fuel tank. Any moisture in your fuel can damage the entire fuel system.

In 2011, the EPA banned the summer sales of E15; they feared that smog would be created because of the higher ethanol content. Ethanol emissions can react with sunlight to make smog. The EPA saw the risk because the summer heat would be a risky time to burn extra ethanol.

Ethanol gasoline burns faster than regular gasoline because it vaporizes more quickly. Most people will see a decrease in fuel economy when using a higher percentage of ethanol in their fuel. The decline may only be a fraction, most people that have made the switch to the higher ethanol fuel (E85) report anywhere from 15 to 25%.

The US Department of Energy states that there are currently 2300 stations that offer E15 In 31 states. That is about 1.5% of the country’s stations.  Stations must adhere to several EPA requirements and regulations to sell E15. The remaining 98.5% may not have the proper equipment to safely store E15 or are set up with the restrictions mandated.

Why use E15 fuel in your vehicle.

Cost is what drives most people.  Just look at the pump’s price, and you will notice that the more ethanol added to fuel saves you money. The gasoline you purchase today already has ethanol added, typically about 10% or called E10. The Biden administration claims that the savings difference between E15 and E10 gas will be around 10 cents per gallon.

How to prevent damage caused by using ethanol-based fuel.

Always use the proper fuel for your vehicle. Check the manufacturer’s recommendations and follow those guidelines. Gasoline additives can be used to prevent ethanol-related issues. REV X Adrenaline Gasoline Treatment is easy to use and, when used regularly, will keep your whole fuel system clean and protect it from harmful ethanol issues.

REV X Adrenaline Gasoline Additive is also a fuel stabilizer and a fuel system treatment. Stabilizers are beneficial for engines that sit for a period without being started.

If you store a car, boat, motorcycle, or seasonal equipment such as lawnmowers, you will want to start them at least once a month during the offseason to make sure they are running smoothly. If you are not using your car, boat, motorcycle, or other equipment, you should keep the fuel tanks about 95% full and add a stabilizer. This will help prevent condensation while allowing room for expansion in warm weather. 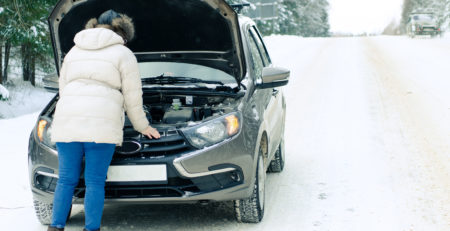 Why Does My Vehicle Always Break down When It’s Cold

This morning I sat in my car, with the hood up, the temperature was down to -7°F. I had to... read more